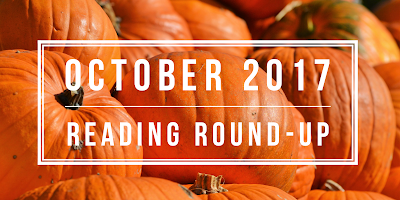 October was a very lucrative reading month for me. I flew through eight books. It also happened to be a very enjoyable reading month for me. I wasn’t crazy about all of the books I read (you’ll notice a bunch of 3-star ratings), but I never found myself wishing I spent my time elsewhere. I have linked back to each books Goodreads page in case one peaks someone's interest and they want to learn more.

Darkness, Be My Friend (Tomorrow #4) by James Marsden
3 stars
Finished on 10/3, Audiobook
I’ve been reading this series since May and while I’m committed to finishing the rest of this series, it’s not spectacular. It is a page-turner (or earworm, I’m listening to it so I’m not sure the exact term). When I read it, I was invested in what happened to the characters. That said, I have yet to finish one of these and be desperate to pick-up the next book. It’s good if you’re into YA dystopian books, but it’s pretty run of the mill.

Still Star-Crossed by Melinda Taub
3 stars
Finished on 10/8, Hardcopy book
An epilogue to Romeo & Juliet. It follows two minor characters from the play, Rosaline and Benvolio, as forced to unite their two warring houses in marriage. This was one of the few cases where he on-screen adaptation is better than the book. Don’t get me wrong, I enjoyed the story and liked the characters, but Taub goes for a stuffy, Shakespearean imitation with her prose and that was a little off-putting. Still, if you’re wondering what would have happened if the show got renewed, I suggest reading this book as the plots are pretty close to each other.

Action Comics Rebirth Vol. 1: Path of Doom by Dan Jurgens
4 stars
Finished on 10/10, Graphic novel
Following the Convergence arc, we have a new Superman with his family on an Earth that is unfamiliar to them. This is part of the DC Rebirth event, resetting the universe after the New 52 mess. This was really exciting for me, not only because Clark, Lois, and Jon are some of my favorite characters, but because the Big Bad in this arc is Doomsday. You get some quality emotional moments revolving around what has happened between Clark and Doomsday on his Earth (this Earth’s former Superman never fought Doomsday). This volume goes a long way toward repairing a lot of the relationships that were damaged by the New 52 run and restoring the storyling to the pre-Flashpoint continuity. I absolutely loved this and I can’t wait to get my hands on volume two.

Turtles All the Way Down by John Green
4 stars
Finished on 10/15, Book
Turtles All the Way Down follows teenage hypochondriac, Aza Holmes, as she and her best friend try to find a disappearing billionaire who’s wanted for fraud. As with any John Green book, this one is full of twists and turns and an ending you don’t quite expect. I thoroughly enjoyed this book. It was thought-provoking and heart pulling. It’s a solid exploration of mental illness and how it shapes both the protagonist and the people around her. For more of my thoughts on this book, you can check my video review.

Burning for Revenge (Tomorrow #5) by James Marsden
3 Stars
Finished on 10/16, Audiobook
Five books down and two to go. This book captured my interest a little more than the last one. I really like when the kids are off on their own and not hampered by the adults. There was a bit of dead space while they were holed up in an enemy airfield, but that didn't last long. It’s been interesting to see how all the constant stress and loss has affected all the kids differently.

Justice League: The Rebirth Deluxe Edition Book 1 by Bryan Hitch
4 stars
Finished on 10/20, Graphis novel
This stinking comic book was full of all the feels. On the one hand, you have the Justice League who are grieving the loss of the Superman they knew. On the other hand, you have poor Clark, who has been letting this Earth’s version of him do all the Supermanning while he stays in the shadows. He's ready to get back into the action. Which is difficult to do when the JLA’s defacto leader (aka Batman) doesn't trust him at all (yet). Of course, the bad guys don’t care about the League’s emotional issues, so they have to deal with all of this while saving the world. I love it. The Superman & Action Comics stuff I’ve read don’t show much of the mistrust and hurt surrounding the Clark Kent/Superman exchange, so it was nice to see some of that friction as Clark tries to fit in with alternate versions of his closest friends.

Warcross (Warcross #1) by Marie Lu
4 stars
Finished on 10/21, Audiobook
This was my first Marie Lu book (I know, I’m late to the party) and I have to say I was not disappointed. The action grabbed me right away and immersed me in the world. The setting was just futuristic enough to be fantastical, but not so far in the future that description bogged it down. I’m super invested in finding out how the two big reveals at the end push the action forward in the next book. I saw the second one--Zero’s identity--coming, but the first one took me totally by surprise.

The Roses of May (The Collector #2) by Dot Hutchison
5 stars
Finished on 10/27, Book
This book picks up a few months after The Butterfly Garden, but it’s not entirely a continuation of that story. We do see several familiar characters though. A couple of the girls show up and the FBI agents from the last book have a more prominent role in the action this time around. The main plot, however, revolves around a serial murderer who kills a new girl every spring and decorates their body with flowers. Five years ago, he killed Priya Sravasti’s sister and now he might be coming after her. I enjoyed this book as thoroughly as I enjoyed that first one, though for very different reasons. Priya and her mother, Deshani, were fantastic characters who I connected with almost immediately. I also loved seeing repeats from the last book.

Three Dark Crowns (Three Dark Crowns #1) by Kendare Blake
5 stars
Finished on 10/30, Audiobook
The enchanted island of Fennbirn is ruled entirely by women and divided among three different factions. The Poisoners, who can consume deadly poisons and suffer no ill effects. The Naturalists, who can commune with animals and plants. And the Elementals, who can control the forces of nature. For the last two generations, the island has been ruled by a Poisoner queen, but she departed the island when her triplet daughters were born. Now, they are finally ready to ascend to the throne. But only the strongest queen can sit on the throne and she must take her sisters’ lives to do so. I was both intrigued and little horrified by this plot, so I picked it up heistantly. And I loved it. I felt like the first chapter was slow, but then we got to the Naturalist queen’s section and I liked her, so things started to pick up. And the ending of this book...I was running possibilities through my head the entire book to see how they would solve two of the queens' problems and the solution was one I never thought of. Needless to say, I loved being surprised (a rare occurrence) and I started the next book right away.

How many books did you read this month? Any faves that I should check out?
at November 02, 2017