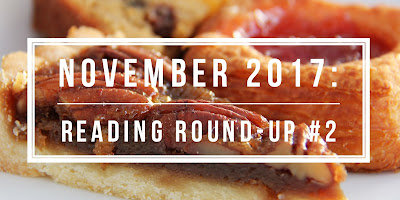 November was a more productive reading month that I planned it to be. I thought I’d gotten through maybe six books, but as it turns out I managed to read a whopping nine books (thank you, graphic novels). I know, I’m impressed too. Of course, there are other goals that I didn’t meet due to my “stress reading” as I like to call it. But that’s another blog post altogether. All titles link back to my Goodreads page if you want to check them out more.

Miss Peregrine’s Home for Peculiar Children (Miss Peregrine’s Peculiar Children #1) by Ransom Riggs
4 stars
Finished on 11/3, Hardcopy
This is a series that I’ve been meaning to pick up for years, but I’ve hemmed and hawed and always had more pressing things to read. However, I was at Target around mid-October and I thought, “Why not?” All the good things they’ve said about this book are true. I love that there are pictures, I love how well the pictures inform the story. They provide just enough detail to get the imaginative juices going, but they don’t drown you in detail. This was a fascinating, slightly mysterious book and if I hadn’t already had a deadline for some of the other books, I would have totally picked the next book up pronto.

The Raven Boys (The Raven Cycle #1) by Maggie Stiefvater
4 stars
Finished on 11/12, Hardcopy
Another series that I should have gotten to ages ago. And oh boy, oh boy, oh boy! Stiefvater hooked me from the very beginning. This book introduced us to Blue Sargent--the only non-psychic in a family FULL of psychic women--and four boys at the local boarding school. The leader of the boys, Gansey, has spent the last several years searching for a medieval king rumored to be in an enchanted sleep on a ley line. As it turns out, Blue’s rural Virginia town is on that ley line. I loved this book from start to finish. It was a challenge to put it down. Blue’s relationship with the boys starts out a little rocky, but I love how she ends up a part of their quest. And I loved the cooky, craziness of her family.

One Dark Throne (Three Dark Crowns #2) by Kendare Blake
4 stars
Finished on 11/13, Audiobook
This book picks up directly after Three Dark Crowns left off and continues to follow the three sisters as they fight for their right to the crown. I really enjoyed how the relationships deepened and evolved over this book. And the plot became even twistier than in the first book. Overall, I enjoyed this book, though the ending was...not my favorite (hence the loss of a star since the last book). However, that often happens to me with middle books and I probably would have been fine with it if the next book had been sitting next to me. All in all still a solid, entertaining, heart-wrenching read and I will definitely be picking up the next book when it comes out.

Streets of Gotham, Vol. 1: Hush Money by Paul Dini
4 stars
Finished on 11/20, Graphic Novel
This title starts up after Bruce’s “death” during the R.I.P. arc. It springboards off of Hush’s last appearance (in which he tried to kill Selina). We’re given this dual storyline between Hush (with the help of plastic surgery) assuming Bruce’s identity and Nightwing assuming the mantle of Batman with Damian Wayne at his side as Robin. A much as I love Bruce, I also love, love, love the fact that Dick Grayson got a chance to pick up the cowl--so basically anything with him as Batman is a win in my book. However, I felt like the storyline wasn’t terribly impactful. It was testing of the waters, the opening of a story that could have a much larger impact.

Frostblood (Frostblood Saga #1) by Elly Blake
4 stars
Finished on 11/22, Audiobook
Ruby has magic in her blood, but it’s the wrong kind of magic. A forbidden fireblood living in a kingdom ruled by a vicious frostblood king. Though she tries to hide what she is, no secret can be kept forever and when hers comes out, tragedy strikes. She is imprisoned by monsters, then rescued by strangers. Strangers who have plans for her, but they offer her vengeance against the king who ruined her life and she’s not about to pass that up. I enjoyed this book. Although it was predictable and had many common YA tropes, they were all the kinds of tropes that I absolutely love. And even though I knew what was going to happen, Blake kept me on the edge of my seat waiting for how it would happen.

The Dream Thieves (The Raven Cycle #2) by Maggie Stiefvater
5 stars
Finished on 11/24, Hardcopy book
I can’t say too much without giving away major plot points for the series, but I loved this book front to back. The character and story development were great. I didn’t want to put it down, I did, but if other responsibilities hadn’t gotten in the way I could have finished this book in one sitting.

Blue Lily, Lily Blue (The Raven Cycle #3) by Maggie Stiefvater
5 stars
Finished on 11/25, Hardcopy book
Speaking of books I finished quickly. I may have shown self-control with the second book, but it all went out the window with this one. This is by far my favorite of the series. The relationships just blossomed. You started to get some payoff for the slowburn romance that had developed. I could not get enough of this book.

The Raven King (The Raven Cycle #4) by Maggie Stiefvater
4 stars
Finished on 11/29, Hardcopy book
This book was just as “must finish now” as the last two books. The pacing was fantastic. Something was always happening, but you didn’t feel overwhelmed. There were several twists that made sense after the fact but were total surprises beforehand. However, it did fall flat for me in a couple of places. Part of it was completely personal preference--I kept getting frustrated that the focus was straying away from my two faves. Part of it was because there were a couple of story elements that I was disappointed by (I may discuss those in a vlog review, but I don’t want to spoil anyone). It didn’t quite hit that five-star sweet spot, but it was still a fantastic book in my opinion. All in all a stellar series.

Action Comics Rebirth, Vol. 2: Welcome to the Planet by Dan Jurgens et. al
4 stars
Finished on 11/30, Graphic novel
In this volume, we get a peek at Lex Luthor’s motivations in taking up Superman’s mantle, Clark confronts his doppelganger, and Lois finally gets back to work. I could honestly have done without the Luthor bits. Anytime he wants to go back to being a good, old-fashioned villain is good with me. (We all know he’s going to at some point.) However, I really did enjoy how they handled Lois going back to work after so long away (a by-product of them being from a different earth). It’s always nice to see Clark being Lois’s #1 cheerleader (which, granted, is something we get to see often) and Jon handled it in the most adorable way ever. Nothing else really stood out powerfully, but I know how a lot of these pieces are going to fit into the grander narrative, so I enjoyed it.