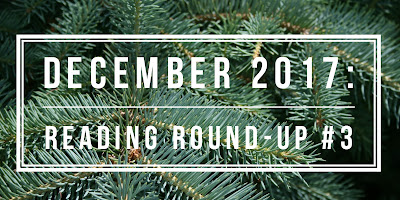 Another successful reading month. Mainly due to the number of graphic novels I read during my 24-hour read-a-thon at the end of the month. All in all, I got through fourteen books, but keep in mind nine of those were comics. As always, the titles link back to Goodreads if you want more details

The Gate Thief (Mither Mages #2) by Orson Scott Card
2 stars
Finished on 12/6, Audiobook
This book picks up right after Danny's confrontation with his family in book one. It follows him as he struggles to figure out how to use his powers and pieces together why the last Loki closed his world off from Earth. Card creates a fascinating interpretation of mythology, weaving strands together from various cultures. However, in this book more than the last, I was bugged by how he treated his female characters. It's a coin toss as to whether I'll finish this series. Which is a bummer since I really liked the first book.

A Thousand Pieces of You (Firebird #1) by Claudia Gray
4 stars
Finished on 12/18, Audiobook
Marguerite Caine's parents are brilliant scientists. Brilliant enough to figure out a way to travel between parallel dimensions. Just as her mother is on the verge of success though, Marguerite's father ends up dead and his murderer, one of her parent's assistants, disappears to a parallel Earth with the device. In pursuit of Paul, Marguerite teams up with Theo, who has carefully guarded the remaining prototypes. They begin a journey to get to the truth...and avenge her father. I really liked this book. The parallel worlds were all intriguing, you never knew how it was going to end up or how different each version of Marguerite would be. It also had a really compelling star-crossed love story, which I thoroughly enjoyed.

Otherworld (Otherworld #1) by Jason Segel and Kirsten Miller
3 stars
Finished on 12/21, Hardcopy book
Simon saw the VR game, Otherworld, as a way to reconnect with Kat, the best friend who has been avoiding him since he returned from boarding school. Instead, it ends up plunging both of them into deep trouble. After a terrible accident, Kat ends up at a special facility for patients with something called locked up syndrome. Simon feels uneasy. But how far is he willing to go to find answers? Is he willing to risk his life? This book wasn't bad. l liked the storyline, though I had issues connecting with the main character. I'm always intrigued by stories that make use of virtual worlds and I think Segel and Miller handled going back and forth between the real world and the game really well. I think I would have liked it better if Warcross hadn't been so fresh in my mind. At this point, I want to read the next book, but I don't think it will be a high priority.

Saints & Misfits by S.K. Ali
4 stars
Finished on 12/24, Audiobook
Janna Yusuf is a Muslim teenager who finds herself in the unenviable position of crushing on a boy that doesn't share her faith. Among all this confusion, she is confronted with the fact that someone who is outwardly pious can internally be a monster. As she decides whether or not to reveal what almost happened to her, she struggles with her faith and how she fits into a world that doesn't share it. We may be from different faiths, but I immediately connected with Janna. Just like her, I was a teenager with far more conservative beliefs than the world around me. She asks herself questions that I asked myself. Just like she asks herself whether she is Muslim enough, I asked myself whether I was Christian enough. This book ended too soon for me and I wish there were a sequel.

A Conjuring of Light (Shades of Magic #3) by V.E. Schwab
5 Stars
Finished on 12/25, Hardcopy
I can't say anything about the plot without giving away MAJOR spoilers for A Gathering of Shadows, but suffice it to say I found this book riveting. The place we left our characters at the end of AGoS seemed like the worst place they could be. It felt like the plot had nowhere to go in this book, but oh man, did Schwab take it places. Every time you think the characters have hit rock bottom, she starts digging deeper. It all culminated in epic final battle and a bittersweet ending that left me longing for more adventures with all my faves. Definitely a series I'll be chucking at all my friends.

Injustice: Gods Among Us, Year Three, Vol. 1 by Tom Taylor
4 stars
Finished on 12/30, Graphic novel
With several of Superman's key allies now incapacitated, Bruce and his band of rebels turn their sights on the Man of Steel himself. I'm not going to lie, the main reason I keep going in the Injustice series is that I love Bruce. The longer it takes for Clark and company to come to their senses, the more out of character their actions feel. It's starting to bug me. But I can put up with an awful lot as long as Bruce is in character.

Injustice: Gods Among Us, Year Three, Vol. 2 by Brian Buccellato
3 stars
Finished on 12/30, Graphic Novel
Bruce continues working with Constantine and then things go to hell, literally. My review for volume two is literally the same as for volume one, so I'm not going to repeat myself. (P.S. I really did like Barry in this issue, even if he went back to being a stupid, stupid-head.)

Batman: Hush by Jeph Loeb
5 stars
Finished on 12/30, Graphic novel
A new villain is on the scene, taking advantage of Batman's old enemies, helping them step up their game and sending them after the Caped Crusader. At the same time, an old romance rekindles and Bruce begins to wonder if there isn't a way to balance his personal life with his nighttime quest. By far, one of my favorite Batman arcs. I loved all the cameos by established rogues. The build to reveal at the end is still one of my favorites. As many times as I've read, so many of the little details still blow me away. Plus, there's plenty of Selina, so you know I'm happy. Also, did I mention that Jim Lee's artwork is divine? Seriously. He is one of my all-time fave comic book artists. He strikes a perfect balance between stylized and realistic in his art. I could stare at these pages all day.

Streets of Gotham, Vol. 2: Leviathan by Paul Dini
4 stars
Finished on 12/30, Graphic novel
Kids have been disappearing from Gotham's streets and turning back up at the river's edge. Dead. Robin takes it upon himself to get to the bottom of it, but he's not quite ready to operate solo. Streets of Gotham is one of the titles where, usually, you have Dick Grayson operating as Batman. And I always love seeing him filling those boots. Also, we get a little bit of growth from Damian--he's slowly starting to figure out how normal kids act. Very slowly.

Streets of Gotham, Vol. 3: House of Hush by Paul Dini
5 stars
Finished on 12/30, Graphic novel
Someone has been infecting the denizens of Gotham with literal sleepwalking bugs. In all that chaos, Hush, still bearing an unfortunate resemblance to Bruce Wayne, makes his escape. A newly-revived Bruce has to track down his doppelganger and he turns to a very familiar feline for help. Three words, y'all: Re. U. Nion. Almost the entire arc focuses on my two faves, so you know I am happy. Also, petty Bruce Wayne taking embarrassing photos of his enemies made my day.

Wonder Woman, Vol. 1: The Lies by Greg Rucka
4 stars
Finished on 12/30, Graphic novel
Confronted with multiple versions of her past and unsure which one is the truth, Diana must turn to an old enemy for help. There might also be an old friend or two in need of a butt-saving. I'm not going to get into my mixed feelings about previous Wonder Woman comics, but suffice to say, this reboot has made me a fan. This is the Diana that I read as a girl, with no need for big-name male costars and a story all her own. Granted, I may not have been reading the right comics way back when, but I'm more invested in her than I ever was before.

Wonder Woman, Vol. 2: Year One by Greg Rucka
5 stars
Finished on 12/30, Graphic novel
The reimagined beginnings of Diana of Themiscira, with a more modern setting and an updated cast. So I won't lie, I'm super into this newer version of Diana's backstory. Namely, because it places her firmly in the modern era. While it's always interesting to see superheroes with a presence in history, I am not a fan of the lone immortal storyline and I'm very glad they thoroughly crushed that in this volume. There is also an awesome focus on Diana's cleverness as she picks up on an entirely foreign culture and language in a matter of days. This Wonder Woman is fresher and brighter than she ever was in my childhood and I like that.

Wonder Woman, Vol. 3: The Truth by Greg Rucka
4 stars
Finished on 12/31, Graphic novel
Following the truth of her past, Diana must piece her reality back together. And she's on a ticking clock because two Greek gods are on the warpath and Diana may be the only one who knows how to stop them. I understand why some people have issues with this arc and there were a few things that rubbed me a little wrong, but nothing that hindered my enjoyment of the story.

Green Arrow, Vol. 1: The Death and Life of Oliver Queen by Benjamin Percy
3 stars
Finished on 12/31, Graphic novel
Philanthropic, new age billionaire by day. Crime fighting vigilante at night. Only while Ollie has been fighting crime, some things at Queen industries have slipped his notice. An investigation into corruption at his own company quickly lands Ollie in hot water. While I loved the character work and the fact that they brought Dinah in almost from issue one, I felt like the story was a little scattered for me, it felt the most unfamiliar and there was a lot that came at you all at once. Don't get me wrong, I really did enjoy all of the characters and I like how they made Oliver a different kind of crime-fighting billionaire than Batman, but I definitely had to just forget about everything I knew about Green Arrow previously and let my brain catch-up as I went.