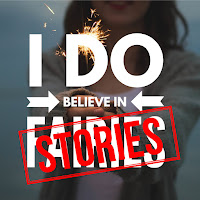 Novels are like fairies. If you don't believe in them, they will die.

I get it. Writing can be such a solitary pursuit. You spend days or months or years working on a thing and you get to a point where you can't tell up from down anymore, let alone good writing from bad.

When you're a writer, doubt comes with the territory. I've seen that doubt expressed in every space where writers gather. I've done my fair share of staring at a sentence and wondering if I should just delete the whole thing. I had a moment like that just last night. I have moments like that nearly every time I sit down to write. The distance between the book I have and the book I want yawns like a chasm most of the time.

So I understand why you look at that story or chapter or poem and wonder if it's even worth working on.

It's easier to just write the whole thing off as a bad idea and move on to the next project trying any harder. Working with new things feels better, they still make your eyes light up and your fingers dance. You don't see the cracks and flaws as the words rush onto the page, you only see potential.

Losing faith in a project is easier than pushing through to see what it can become.

The longer I work on this draft (and I am working on this draft), the more I struggle with the newer ideas that creep in to tempt me. I have been working on this book for so long. It feels like decades, it's really only been about four years. And if this is the one that finds a publisher, then I'll be putting even more work into it. That's daunting when you've been working on something long enough to be tired of it.

I've thought about giving up.

About leaving this novel and all it's flaws and problems, consigning it to the trunk where my last three projects sit (for good reason).

But if I don't believe in this story, who will?

If I declare it hopeless and decide that it's not worth it, how will I ever know if that's true? How can I expect someone else to believe in it if I don't?

You see, you are your story's first cheerleader.

You are the one that will decide whether or not this story gets read.

I have seen mediocre stories succeed because the people behind them believed they were worth the world's attention. The writing world is full of writers who kept going, kept pushing because they believed their story was worth reading.

So believe in your story.

Even when you think it sucks. Even when it feels like you can't possibly fix it.

Give it a chance. Maybe it's not the right story. Maybe it will never be any more than a learning experience. But you won't know until you try.
at April 10, 2018