Writing is a journey 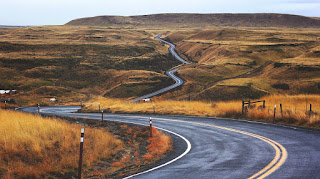 A year or so ago, I unearthed a collection of short stories I wrote in middle school.

It’s in one of those plastic portfolios. The cover consists of a black and white clipart Xeroxed onto colored paper—purple of course—and my modest Lisa Frank sticker collection decorates it.
The earliest piece, simply dated “1998”, is a recollection of the time three-year-old me accidentally dialed 911 (I was practicing, okay?).

It also includes what may be my earliest foray into fan fiction—three installments of Imaginary Me’s adventures with her TY Beanie Babies come to life.

There’s an essay written in various shades of neon gel pen on notebook paper. Several stories were written on my mom’s old typewriter (one of the fancy 80s models that took floppy disks and involved a tiny screen full of glowing green text). One was written on the computer that my father, brother, and I purchased at Best Buy at some unholy hour on a chilly, November morning.

The paper is yellowed. The ideas are innocent. And the typos abound.

I honestly haven’t read past the first few sentences of the first story. I don’t remember if anyone proofread these stories, but oh boy, do they need it. Aside from the typos and the stilted dialogue, I used so many synonyms for "said" in the first paragraph that Ebony Dark'ness Dementia Raven Way would blush.

About year or so before I found that gem, I pulled out a story from my college days because I wanted to rewrite it into something publishable. The premise is solid, but the word count is that of a novella, it is reliant on clichés, and a cardboard cutout has more character than my male lead. My current project did not have to work hard to commandeer my attention. Someday, it’ll be time to dig that sucker back out again and change it from the cringe-worthy mess that it is and into the story I know it’s meant to be. But not just yet.

It’s my expert opinion that my writing has improved since I wrote that little novella. And I’m definitely much better than I was when I was twelve. (Although, maybe I should see if there's a market for new and improved Beanie Baby adventures.)

Every story I've written has made me a better writer. Yes, even the fan fiction. My second attempt at a novel was loads better than my first. My current work in progress is even better than that. Even the current draft of this book is better than the first draft.

There isn’t some magical point where you will be the best writer you will ever be. (And thank goodness for that!)

Writing is a journey.

Writing is exploring. It's seeing things differently. It's figuring out when to use one word instead of two.

And it’s figuring out when two words paint the picture better than one.

I don’t know how many thousands of words exist between those first creative writing exercises and my current novel, but I know that all those words helped me get to be the writer I am today.

And it’s what will help me become the writer I will be tomorrow.

What about you? What does your writing journey look like? Did you start young or is it something you picked up at a later age?