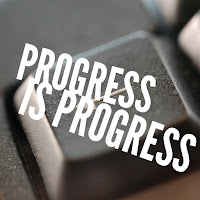 I used to be a prolific writer.

No, seriously, I could sit down and write thousands of words in a sitting. My personal best was six thousand words written one summer night when a story sank its claws into me and refused to let go. The book I'm working on now was written in just two months. That rough draft was about ninety thousand words and my planner from those two months is littered with days that have multiple star stickers stacked one on top of the other (I used to give myself a sticker for every thousand words I wrote).

Now I feel lucky when I focus long enough to string a hundred words together. This draft, the fifth, has been in the works on and off since November.

And I am frustrated.

I wish I could be all zen about it and spout something about each book taking as long as it needs to take.

I'm ready for a break from this book. For something else to work on. A shiny, new story.

But I'm resisting the urge to work on shinier things because I do want to finish this book. I want to whip it into shape and shop it around. I want to see this book on the shelves at a bookstore. I just don't want to work on it anymore. I'm tired of crawling along at a snail's pace, painstakingly inching my way through chapter after chapter. Some days, I feel like I will always be working on this book, like this is the only book I have ever worked on, like I am getting nowhere.

As I write this, I'm kind of dreading my current chapter. A part of me wants to finish this post and call it a day. That's not what's going to happen, but it's what I would like to happen. I would much rather be reading a book right now than writing one. However, as much as I dread working on the next chapter, I also know that if I focus, if I push through that moment when I stare at yesterday's final sentence wondering where the heck I was going I'll actually get some work done.

No, it won't be the thousands of words I can slam down in a rough draft, but editing has taught me to count my success in hundreds of words.

If you follow me on Instagram, you might have seen me post about #AHundredOrDie, which encourages authors to sit down at their computer and write the next hundred words of their WIP. Once that is done, you're allowed to quit and do other things, but the goal is to make progress. And me, being utterly frustrated with my lack of progress over the month of January (I think I got through one chapter of my WIP), decided to give it a try.

It doesn't have me flying through the pages of revision, but I did more writing in the first week of February than I think I did the entire month before.

It's not as much progress as I'd like to have made (I'd like to be done), but it is progress.

That's what I'm focusing on.