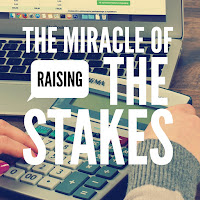 I am a procrastiwriter. There is no denying. Give me an inch and I will find twelve super important tasks that must be done before I work on my novel.

If you've been following me for any length of time, you've probably realized that I've spent the last few months in a bit of a writing rut. I could talk a good game, but behind the scenes, not much noveling was happening. I won't go into it since I've already talked about it ad nauseum on my Instagram. (Are you following me over there? You should be following me.)

Apparently, real, solid stakes were what I needed to get out of that rut. And by stakes, I don't mean I needed to put my protagonist in more danger (although, that did happen as a result).

I needed to put myself in a place where I was vulnerable.

At the end of last month, I queried an agent.

Said agent passed on my work, I'll get that out there right now. This is not the blog post where I'm all, "I'm getting published!!!" Y'all still have that to look forward to.

This is the blog post where I'm all, "Yay! I got out of that darn rut."

Like any savvy millennial writer, I follow several agents on Twitter (and writers and editors). Mostly, because I will be hunkering down in the query trenches soon and I'm grateful for any tips, tricks, or cheat codes industry professionals might dispense.

Twitter is also a good place to build a relationship with those same professionals, or at least familiarize them with your name (not in a spam way, that will get you known in the wrong way), and familiarize you with them.Are they a cat or a dog person? Do they like fantasy or contemporary? What is their favorite movie? It's a great way to gauge whether they'd be interested in your novel (as is their website, find it, memorize it).

This is how I discovered that one of the agents I planned to submit to was asking for YA fantasy submissions.

So, I took a chance and submitted a query letter.

That on its own is a big thing.

Kudos to me, except technically I didn't have a finished novel.

Well, I did, but I didn't have the best version of that finished novel, because, as you'll recall, I've been in the middle of a draft for months.

Don't do that. Had that agent actually been interested, I could have been in a bit of a tight spot.

I took a calculated risk when I submitted to that agent. I knew I had a really good first half of a novel that, because of changes I made in this recent edit, didn't quite match up with the back end. Before I wrote the first word of my query letter, I combed through the agent's Twitter and figured out their approximate response time for queries. Then I sat down with my novel and determined exactly what need to change to make both halves of my novel merge successfully.

It was a lot less work than I had been expecting.

So I sent in my query with an estimated word count (another thing that you should not do unless you are very close to finishing) and the knowledge that I had a week, maybe two, to get my novel into tip-top shape.

As you can probably guess by the fact that I'm still editing (you'd know this if you follow me on Twitter) almost a month later, I needed more time than a week. But, luckily for me, the agent passed on the project.

And I'm not mad. I'm not even really upset. I knew I was tempting fate. Would it have been nice if that agent asked for more of my manuscript? Yes. Did my ego need that boost? Yes. But now I don't have to stress about keeping to the word count I promised and I can breathe a little as I finish this draft.

However, I needed that push. The sudden rush of possibility that kicked my butt back into writing gear. I am honestly more focused than I've been since November, all because for a week, I had a real, tangible deadline. And now, I know exactly what needs to be fixed. If I had never gotten it in my head to submit to that agent, I'd probably still be floundering in Chapter Ten (I spent most of February in Chapter Ten). I have a plan now.

For me, that's the win. I've felt so lost and overwhelmed by everything I thought I needed to change. My brain was certain I was looking at a gargantuan task, that I was about to wrangle a tyrannosaurus rex, but thanks to perspective, I now know I'm just looking at an over-sized chicken.

I can handle an over-sized chicken. Probably.