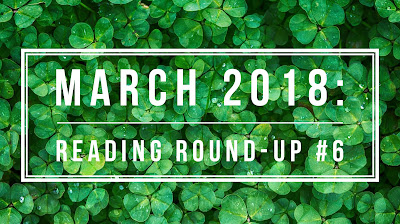 March was a good reading month for me, though we have finally hit the slow down. It might not look like it, I did get through twelve books, but the second half of the month I felt myself losing that "fresh start" steam. A bit of a mixed bag reading month. I didn't get through nearly as many of my TBR books as I hoped, but the ones I did get through I absolutely adored. Unfortunately, there were also a lot of books that I can only describe as "meh", as you'll see. If you're interested in what I'll be reading in April (besides all the March books I didn't get to), my newest TBR is also going up on my YouTube channel today.

See How They Run (Embassy Row #2) by Ally Carter
5 of 5 stars
Finished on 3/2, Hardcover
With Grace still reeling from the big reveals at the end of book one, you would think someone would make sure the poor girl got some time to process. But no, she gets thrust right back into the think of international politics. And what she discovers might be the most dangerous secret yet. So this book. This book. Next time I wait this long to read an Ally Carter book, someone needs to smack me. This book was so good. Since all most of the cards were on the table in this book, all the stuff about the last one that bugged me didn't carry over. The character relationships deepened, the plot thickened, and the ball dropped. Oh, and there was romance. I love how Ally Carter does romance.

Soldier (Talon #3) by Julie Kagawa
2 of 5 stars
Finished on 3/3, Audiobook
I can't say about this book without spoiling a bunch of the plot. It had a lot of elements that I liked. A lot that would have had it at a three- or even four-star rating if the thing that happens at the end hadn't happened. Considering my feelings about the direction the romance seems to be heading in, I'm not sure I'll be continuing with this series. On the one hand, I want to know how things end, but on the other hand, romance usually makes up the good portion of my enjoyment of a book and I'm not on board with the apparent romantic interest. I really liked the first two books, but this one just left me so frustrated and disappointed. (If you've read this, let me know if a certain someone stops being so darn possessive, maybe then I could be okay with all that.)

Take the Key and Lock Her Up  (Embassy Row #3) by Ally Carter
5 of 5 stars
Finished on 3/4
After fleeing for her life in the last book, Grace has to decide whether she will return to Adria or keep running. The problem is she can only run so far and she just might have to stop and face the ghosts responsible for her mother's death. This was a spectacular conclusion to this series. Ally Carter does such a great job crafting the tension in this book, keeping you on the edge of your seat, but also giving you moments of reprieve. I like that this series feels complete (as opposed to the Heist Society series which still feels a little open-ended). She did a great job wrapping up both the major plot points and the main characters' storylines. I was so happy with this book. So happy. Another win in my book for Ally Carter.

Green Arrow, Vol. 3: Emerald Outlaw by Benjamin Percy et. al
4 of 5 stars
Finished on 3/5
Returning to Star City, Ollie finds that himself the focus of a city-wide manhunt. Authorities have him pegged for crimes he did not commit and it's up to Ollie and the crew to clear his name. So, I kind of know a couple of the things the Green Arrow writers are building to (thanks, Tumblr--no really, that's exactly what bumped this title up on my reading list) and I think they've laid a great basis. They've basically taken Ollie as low he can go--well, without someone dying. It's good, they've really taken advantage of the way that you can layer storylines in comic books. Super excited to pick up the next volume.

Fahrenheit 451 by Ray Bradbury
2 of 5 stars
Finished on 3/6, Audiobook
Guy Montag lives in a society where the houses don't burn anymore and books are outlawed. With no fires to fight, firemen like Guy start them, burning contraband books whenever they are reported. This book was interesting and definitely made you think. The plot was a little...plodding for me. A great deal of narrative time is spent in Montag's head, but the descriptions of the society and world he lives in were fascinating. While not my favorite book, I was glad to have finally read it.

Headscarves and Hymens by Mona Eltahawy
2 of 5 stars
Finished on 3/8, Audiobook
Mona Eltahawy is an Egyptian journalist and women's rights activist. This book is a fascinating and heart-wrenching account of both her own experience and the experience of women she has known or interviewed. She sheds much need light on both the state of women's rights in the Middle East and the women who are fighting for them. While I did not agree wholeheartedly with Eltahawy's brand of feminism, it was one I could respect and I appreciated how frank she was about the changes need in Middle Eastern countries. Trigger warning for mentions of rape and FGM.

The Cruel Prince (The Folk of the Air #1) by Holly Black
5 of 5 stars
Finished on 3/11, Hardcover
Kidnapped after her parents' murderer, Jude grew up the adopted daughter of a noble fairy lord. While her stepfather's position grants her some protection, no ordinary mortal live unscathed among the fey without taking extraordinary precaution. As Jude strives to secure the king's protection, one of the king's sons makes her an offer that could give her everything she has ever wanted. That is if the job he offers her doesn't get her killed first. This book was hands down my favorite book of the month. Quite possibly one of my favorite books of the year. Holly Black perfectly captures both the beauty and danger of the fairy courts and Jude is a clever, plucky protagonist with a cutthroat devotion to her goals.
Video Review

Into the Still Blue (Under the Never Sky #3) by Veronica Rossi
4 of 5 stars
Finished on 3/17, Audiobook
Perry and his tribe are stuck. The aether storms are growing stronger and they have no sustainable shelter. Their only chance is cross the ocean and reach the still blue, but travel on ships is fatal and they have no way to get through the wall of aether between them and safety. Their only hope lies with him and Aria as they lead a raiding group on the combined Dweller and Horn forces. A fantastic conclusion. Rossi keeps you on the edge of your seat for nearly the entire book as Perry and Aria fight for their survival and the survival of their collective people. It did drag a tiny bit in the middle, but all in all, it was a great read and one I wish I had on my shelves.

A Beginning, a Muddle, and an End by Avi
2 of 5 stars
Finished on 3/17, Hardcover
This was a cute book, but not quite what I expected. From the subtitle, I was expecting a book of writing advice and anecdotes, but it turned out to be a cute little book about two friends having an adventure with some writing involved. There were some wonderful nuggets sprinkled in the book, but if I had read the blurb before picking it up, I probably wouldn't have read it at all. It just wasn't what it appeared to be.

A small suburban neighboorhood in Ohio gets shaken up when a young mother tries to reclaim the baby that she gave up during a bout of homelessness. The ensuing legal battle strikes a rift in the community. The Richardsons find themselves right in the middle of this scandal and the result could have lasting consequences not just for their community, but for their family. This is a book of tradition and free spirits. Of dreams and goals and peer expectations. Of what happens when you live life inside the lines. And of what happens when you ignore the lines and chart a new course. Most of all, it's a book about family and the many ways families can be made and unmade. It was not a comfortable book, both because there is some inherent racism and because of the blatant classism that follows hot on its heels. But it was also a very good book. So, so good.

The Alchemist by Paulo Coelho
2 of 5 stars
Finished on 3/25, Audiobook
This is a sweeping story about a shepherd boy whose dreams send him on a quest for treasure in the African desert. Though this book wasn't necessarily for me, the writing was gorgeous and it had such a wonderful message about finding and following your dreams. It was inspiring. However, I was a little annoyed at the lack of female characters. There are only three of note, while our protagonist interacted with and was influenced by many, many male characters.

A Wrinkle in  Time (The Time Quintet #1) by Madeleine L'Engle
4 of 5 stars
Finished on 3/31, Paperback
One stormy night, Meg and her family find themselves hosting an unusual visitor. One who seems suspiciously friendly with Meg's youngest brother, Charles Wallace. But the strange woman knows about a secret project that Meg's mom and dad were working on before he mysteriously disappeared. Now it's up to her, her brother, and a new friend to travel to places Meg never even dreamed of in a quest to bring her father home. You know how they say the book was better? The book was definitely better in this case. I mean, I liked the movie, but so much of the plot got left out and everything made so much more sense when I finally read the book. It was an adorable middle-grade novel, but also a fantastical and thought-provoking one. It entertained you and made you feel things. Just the short glimpses we get of the different worlds are so descriptive and fleshed out, you really get a good feel for the characters. The ending seemed a bit abrupt when I read it as a kid, but now that I know there are four more books, it makes perfect sense.

If you've made it to the end, I hope you had a wonderful reading month. Chat with me down below about what your favorite books of March were.
Also, starting this week, I'm making some changes to my blog schedule. I'm going to try posting blogs on Tuesday and bookish chats on Fridays to see if that makes juggling all my writerly tasks a little bit easier. Thank you for your patience as I figure this out and don't forget to subscribe so you don't miss any of my wordy, nerdy content!

See you on Friday!