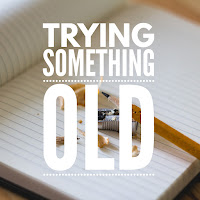 I know, long time no see. Real life and a case of blogger's block kind of derailed last month's blogging routine (or at least my attempts at one). I have, however, made some progress in other writerly departments and I wanted to share some of that experience.

So, if you've been around here for a bit you know that editing my work in progress has been a bit like wrestling a crocodile. Things got messy, all the best-laid plans went awry, frustration abounded. Basically, the human was losing. So out of desperation, I decided to try something.

Something I hadn't done in a looooooooong time.

I decided to go back to writing longhand.

And it worked. I put that pencil to the paper and it was like someone waved a magic wand. Poof! The crocodile became a cuddly bunny. Okay, more like a moody housecat, but you get the picture.

I've heard that changing things up in your routine can help with blocks, so I always look for new programs like novlr or Write or Die, but until last month it never occurred to me to glance back.

All the way back. To high school.

All of my early writing was longhand. Sometimes with a pen. Sometimes with a pencil. Almost always with the notebook upside down because I am left-handed and that inch margin at the top is exactly the number of lines that always ended up unused when the paper was right side up. My family had a desktop (with a floppy drive) and I would type up my stories (and essays) once they were finished, but my writing program of choice was a nice, light, portable spiral bound notebook.

Maybe it was the call back to those early writing days. Or maybe I was accessing a different area of my brain. I don't know. Something about putting that pencil to paper freed whatever was stuck inside me. In a matter of days, the chapter I'd been struggling over for weeks was finished. Of course, then I had to take the time type it all into my Google Doc, but all magic comes with a price. And it still took less time than trying to struggle on my laptop.

For my most recent chapter (a new one that I'm adding to tie a few things together), I did try writing on the computer again, but I quickly was back in my notebook. It just seems to be what is working for me right now.

And yes, it's a little annoying that I'll have to type everything up when I'm finished. But you know what's not annoying? Finishing the darn book.

And, thanks to some old friends, it looks like I might do that sometime this decade.
at June 06, 2018